The eighth Sangeetha Surabhi award was presented to Carnatic Music maestro Dr. R.Vedavalli on 16th November 2014, in a colourful ceremony.

One of the greatest musicians and musicologists of our time, Dr.R.Vedavalli was bestowed with the title of Sangeetha Surabhi for the year 2014 in a grand function on 16th November 2014. Sri. N.S.Krishnamurthy, Director of AIR, Bangalore (Retd.) presented the felicitation speech where he recounted the immense contribution of Dr.Vedavalli to the cause of Carnatic Music. Smt.Neela Ramgopal, a close friend and fellow musician from Bangalore spoke a few words about Dr.Vedavalli, with affection. In her acceptance speech, Dr.Vedavalli expressed her thanks with great humility and dignity.

Sangeetha Surabhi award to Madurai Sri.T.N.Seshagopalan for the year 2013

The seventh Sangeetha Surabhi award was presented to Carnatic Music maestro Madurai Sri.T.N.Seshagopalan on 17th November 2013. Here is a brief write up about the grand event.

In the continued effort of Nadasurabhi in honouring senior musicians who have contributed immensely towards the growth of Carnatic Music, Madurai Sri.T.N.Seshagopalan, an unparallelled genius in his field was felicitated on the morning of 17th November 2013. In front of an august audience, Smt.Harini Raghavan, General Secretary read out the citation briefly going through the various achievements of the maestro. The award was received by Vidwan T.N.S.Krishna, son and disciple of Sri. Seshagopalan, on behalf of his father. The chief guest Prof. Mysore V Subramanya, in his felicitation address recalled the 25 years of his personal association with Sri.TNS. Mentioning the uniqueness of the great musician, he described the way swarakalpana would come bubbling through in Sri.TNS's concerts like a "pravaaha" , his guru bhakthi, total concentration in music during concerts without distractions and several personal anecdotes. Sri. TNS Krishna, in his acceptance speech brought out the special relationship that his father holds with Karnataka and also specifically Nadasurabhi. He also mentioned about the multifaceted genius of his father, whom he is privileged to represent on this day (due to ill health of Sri.TNS).

Sangeetha Surabhi award to Dr.N. Ramani for the year 2012

The sixth Sangeetha Surabhi award was presented to flute maestro Dr.N.Ramani on 25th November 2012 . Here is a brief write up about the grand event. 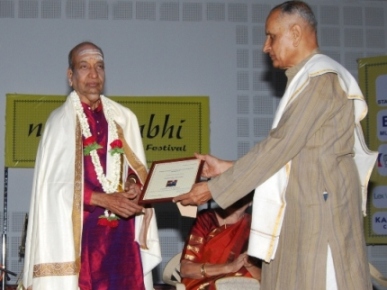 rasikas of Bangalore in the august new auditorium of St.John's Nurses College. The event was the felicitation of Sangeetha Kalanidhi Padmasri Dr.N.Ramani, the unparalleled genius in the field of Carnatic flute. The president of Nadasurabhi Brig.N.H.Narayan honoured the artist with a shawl and citation of the award of "Sangeetha Surabhi". Vidushi Neela Ramgopal presented the felicitation speech. In his acceptance speech Dr.Ramani thanked the organisers and gave his best wishes to the organisation. He also mentioned that the Sangeetha Surabhi award was the 103rd award that he is receiving in his illustrious career!